All solvents have a temperature threshold to when heated above this temperature, they will begin to break down and become ineffective. The contaminant concentration an atmospheric distillation can reach is therefore limited to the boiling point of the of the contaminant-solvent mixture that requires a temperature at which the solvent begins to break down. For trichloroethylene, for instance, the critical temperature is around 220 F.

The curve shows the boiling points of trichloroethylene for increasing oil concentrations. Open top vapor degreaser manufacturers recommend distilling until reaching around 35% at which point the mixture would require a temperature of 217 F.

Vacuum systems keep reducing the pressure to concentrate contaminants. Concentrations from 70 to 95% oil are commonly attained. The savings is two fold. The more solvent recovered the less solvent needed to be purchased and the less waste disposal required. This can be very economical when specialty solvents are being used. All of Vacuum Processing Solvent Systems come with vacuum distilling on board. 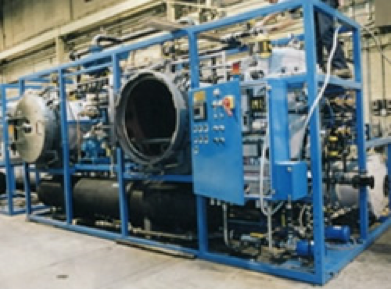